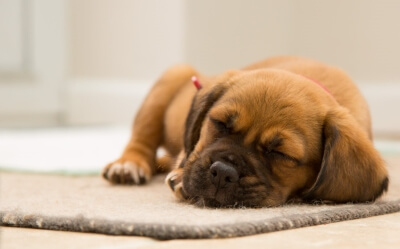 Pets make gestures that communicate their mood, desires, preferences, level of comfort or apprehension, and more. Dogs are particularly good at making these gestures, from wagging their tails, whining, and others. But did you know that the sleeping position of your dog is one of the gestures a dog makes? 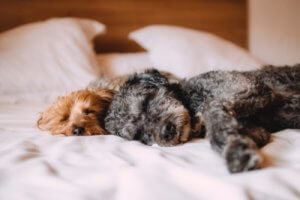 The way a dog sleeps can tell a lot about the dog’s character and temperament and current level of comfort.

As a pet owner and one who spends a considerable amount of time with your pet, you already understand how comfortable or uncomfortable your dog is.

You also know a lot about its behavior, and how it sleeps.

The superpup position involves your dog resting on his stomach with his legs stretched out.

It’s a strange position but one that’s equally funny.

The dog looks like it’s about to spring up, or ready to do so.

It indicates a dog that’s not actually sleeping but napping.

It’s the reason why this sleeping position is common during the day when a dog feels he supposed to be awake.

If you see your pup in this position, know that he is looking up to having a good time with you.

It’s time to play with him or take him for a walk.

This position is among the most peculiar a dog can adopt to.

The dog lies on its back and outstretches the legs.

It’s a position that can make you doubt whether your dog is really relaxed or if the position is a source of discomfort.

It shows your dog is at home with its surrounding, and that it feels entirely peaceful and confident.

The outstretched legs are a sign of the trust he has on you, and the belly thrown upwards a sign of submissiveness.

If your dog sleeps in this position, it means he is independent and emotionally undisturbed.

The “Side Sleep” Position

In this position, your dog will look calm and undisturbed.

He will seem to be stress-free and relaxed. 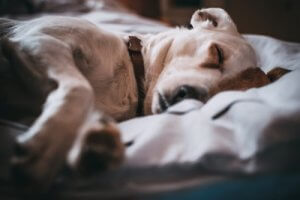 A dog adopting the side sleep position indicates trust that his surroundings are safe, and that he expects nothing to come disturbing him.

It could also indicate that there exists a bond of love and affection between you and your dog and that he trusts you fully to be a kind owner.

In this position, your dog curls up with paws tucked underneath and the head lying on the tail.

It’s a pretty adorable position to see your pet dog in for its amusing pose.

He will use this position when he wants to gather warmth and as a way to ensure delicate body parts are covered and out of harm’s way.

The fuzzy bagel position could mean your dog is fearful of something, that he feels his safety is not guaranteed while in that surrounding.

If nothing has happened that could be causing the dog to be terrified, it could be that he is one of the dogs that love to curl up when resting.

The “Passed Out” Position

In this bizarre position, your dog will look like it has fainted, and could even prompt you to have a closer look.

Dogs rarely assume this position when outdoors but only when in the safety of the house.

They often use this position when they’ve been through an activity or environment that made them feel hot because the position allows them to lose heat.

A dog that uses this position is a confident dog.

Such dogs are not afraid of new people or surroundings.

These types of dogs take very little time to get used to a new home or owner. 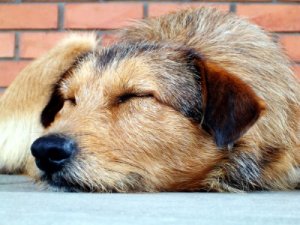 This sleeping position involves your dog lying down on its stomach.

If you see your dog sleeping in the tummy time position, it’s a sign that he is stressed.

It’s difficult for a dog to fall asleep when in this position; the muscles are tensed and don’t allow him the comfort that would bring about sleepiness.

A tummy time position shows your dog is afraid of strangers or unfamiliar places.

This kind of dog will usually run away from people they have not met before.

On the other hand, these types of dogs are playful and confident when around people they know, such as their owners.

The tummy time position could also indicate a dog that wants to play rather than rest.

In the light doze position, your dog dozes off while supporting their body on something.

The dog is usually not asleep but merely taking a rest, and can wake up at the slightest sound.

The position shows a tired dog who wants to nap without drifting into deep sleep.

The Dog remains alert all through.

“Sleeping on the Back” Position

The dog lies facing upwards with their paws on the chest.

It’s a position that allows them to rest most comfortably.

If you find your pooch in this position, it means he doesn’t want to be bothered by anyone.

The best thing to do with a dog sleeping in this position is to let them continue sleeping.

With sleeping positions revealing a lot about a dog’s personality and mood, you may want to watch carefully the position adopted by your pet dog.

It will help you know what to do to make him comfortable, like buying him a doggy bed.

It doesn’t matter his size or age; dog beds for large dogs can be used by almost any dog.

A dog doesn’t stick to one sleeping position all through but will vary it according to the situation at the time.

The positions change as the dog drifts from one mood or condition of body and mind to another.

Sometimes a dog will circle the place it intends to sleep in while digging it.

It’s pretty normal, unless it becomes too much, in which case you would need to seek the advice of a vet.

The vet would be in a position to diagnose if this extreme behavior is related to a medical condition.

It is not uncommon for dogs to gain a little too much weight. When dogs…

How to keep a pet busy during the day

Dog Nutrition at Its Finest: Do Popular Dog Supplements Work?

Dogs are said to be man’s best friend. It is even said that they are…

dogequipmentexpert.com is a participant in the Amazon Services LLC Associates Program, an affiliate advertising program designed to provide a means for sites to earn advertising fees by advertising and linking to amazon.com.